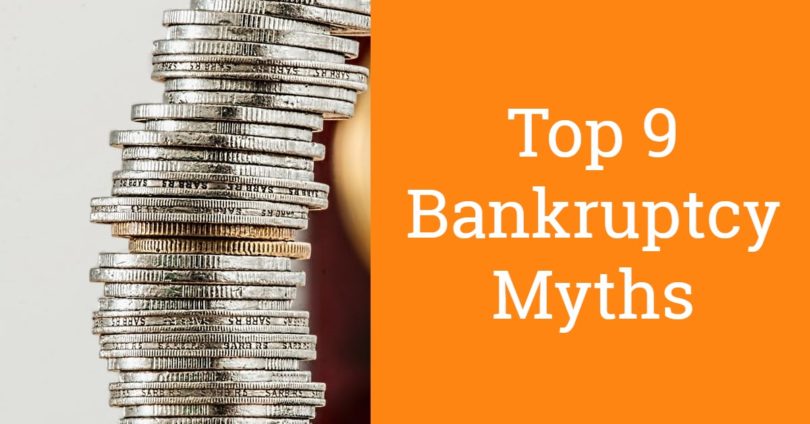 No one wants to be the one to have to file for bankruptcy, but filings are actually fairly common. Last year 884,956 American households filed for bankruptcy. Yet, like many unpleasant and scary procedures, bankruptcy’s reputation is based on a few tidbits of truth combined with a lot of embellishment.

Falsehoods about filing are rampant, from the people who file to the implications for those who proceed. Truth be told, bankruptcy is not nearly as frightening once you understand it and today we’re shedding some light on the 9 biggest bankruptcy myths.

1) Married Couples Will Both Have To File

However, if debt is shared between spouses then both should file. If both spouses are liable for debt and only one spouse files, then creditors can demand payment in full from the spouse that didn’t file.

Under no circumstances will a bankruptcy completely terminate your credit. Sure you can expect limited access to credit and for the seven to 10 years that a bankruptcy remains on your report, but the effects are not permanent. In fact, you’re likely to receive credit card offers within weeks of your debt discharge. Granted, those cards will be secured cards with a low limit.

It’s astonishing how quickly credit scores can recover from bankruptcy. A report from the Federal Reserve Bank of Philadelphia revealed that those who file for Chapter 7 bankruptcy in 2010 had an average credit score of 538.2 on the Equifax scale of 280 to 850. In the six to eight months it took for bankruptcies to be finalized, scores jumped up to an average of 620. Your credit will be far from doomed should you file for bankruptcy.

Being that credit card debt is dissolved in Chapter 7 bankruptcy, in theory you should be able to embark on a spending spree ahead of time and have all of the debt removed in court…right? This is a common misconception some people fall believe.

Courts have ruled that racking up charges ahead of a bankruptcy filing is considered fraud. Moreover, debt that is incurred as a result of fraud is not discharged. Unfortunately, bankruptcy won’t afford you a debt free shopping spree.

Many file for bankruptcy hoping for a clean slate and fresh start, which isn’t quite the case. Chapter 7 bankruptcy will discharge most unsecured debts such as personal loans, utility bills, credit card charges, medical bills, and back rent. Chapter 7 can even relieve you of secured debts under certain circumstances, but not all debt can be discharged in bankruptcy.


Debt arising from child support and spousal support cannot be removed under any circumstances. Similarly, as a result of the Bankruptcy Abuse Prevention and Consumer Protection Act of 2005, student loan debt is also undissolvable along with most tax debts.

It’s easy to wave off bankruptcy filers as reckless spenders who don’t understand how to manage their own finances, but more often than not, bankruptcy is not the result of a personal failing. In fact, the three major causes of bankruptcy are divorce, severe illness, and job loss. Many avoid bankruptcy fearing it as an admission of failure or character flaws. However, bankruptcy is a financial remedy that is available all US citizens for a reason.

Long-term unemployment, the legal fees, and support costs associated with divorce, and the high cost of medical care have driven many well-intentioned Americans into bankruptcy. From 2013 to 2016 the average long-term unemployment rate hovered at 1.84%, leaving 2.8 million Americans out of work for six months or more at a time.

Furthermore, the cost of medical deductibles has grown seven times faster than wages. Hence, bankruptcies are likely the result of stagnant wages and an unhealthy economy rather than poor financial management.

6) You’ll Lose Everything In Bankruptcy

If you file for bankruptcy you can rest assured knowing you won’t be left out on the street with nothing to your name other than your underwear. Most property in a bankruptcy filing is exempt and debtors rarely lose anything at all. Assets considered exempt vary from state to state, but your house, vehicles, and clothes are safe.

Even the items that aren’t exempt creditors often don’t want. Your flat screen TVs and smartwatches are worthless to a creditor. Many assets either have little intrinsic value or are overly encumbered with debt.

7) You’ll Lose Nothing In Bankruptcy

Conversely, there’s the myth that attorneys hold more power than they really have. Some people make the mistake of believing that an attorney can shield all of their assets, from the yacht to the mansion. In reality, you’ll lose a fair amount of things in a Chapter 7 bankruptcy. Property that isn’t protected by an exemption is at risk and unnecessary luxury goods that are completely paid off can be sold with the proceeds applied to the debt.

Sure, you’ll hear stories about the lucky filers who managed to keep their mansions and boats within their possession, but chances are they didn’t fully own the property. Assets that are leased, rented, or heavily leveraged cannot be used by creditors.

8) It’s Hard To File For Bankruptcy

It’s actually quite the opposite. Technically speaking, you don’t even need an attorney to file for bankruptcy. You can fill and file all of the paperwork yourself. However, it’s not recommended you file without legal aid. There are a few components to filing a bankruptcy that you could unknowingly mess up. You could file under the wrong chapter, incorrectly cite property exemptions, or even fail to adequately defend against an action seeking to deny discharge.

In many cases people file for bankruptcy completely unaware that there are other alternatives available to them that may be a better fit for their situation. In any case, it’s best to consult with an attorney first to discuss your options.

9) You Can Only File For Bankruptcy Once

There’s always the chance you may find yourself in a financial rut more than once in your lifetime. Luckily, you can file for bankruptcy more than once should you need to. You can file for Chapter 7 bankruptcy once every eight years. Chapter 13 reorganizations can be filed once every two years, but because it typically takes three to five years to complete a Chapter 13 repayment plan, you can normally file for a new Chapter 13 immediately after your previous reorganization ends.

Nonetheless, just because you can file for another bankruptcy doesn’t mean you should. Multiple bankruptcies do not look good and can deteriorate your credit rating. It’s best to only file for an additional bankruptcy if it’s absolutely necessary.